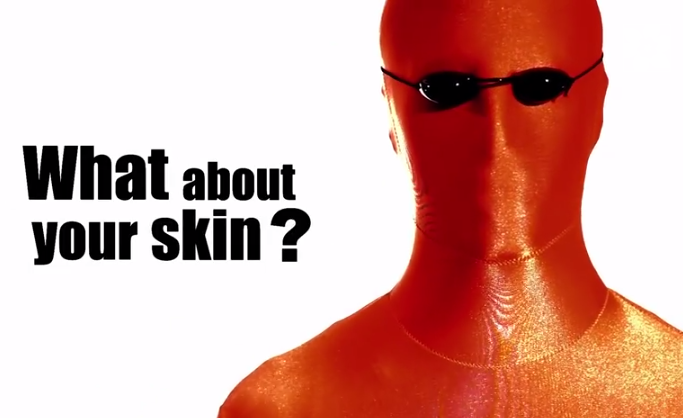 When we process so much cultural information at such breakneck speeds, weir coincidences pop up all the time.


It happened to me last week, when this February PSA by the Canadian Cancer Society showed up in my Facebook feed:

Then literally moments later, a BoingBoing post about a Japanese fad called Zentai caught my attention on Twitter:


Zentai (short for "zenshintaitsu," Japanese for "full body suit") is a largely obscure Japanese subculture whose adherents go out wearing full-body patterned spandex suits that cover their faces. In a relatively unsensational article in the Japan Times, Harumi Ozawa talks to a few zentais about their hobby, and learns that for some proponents, being completely covered is a liberating experience. The zentais in the article describe the suit as an anonymizer that frees them from the judging gaze of society, which is a fascinating study in contradictions, since the suits undoubtably attract lots of judgmental looks, but these seem to adhere to the suit without penetrating to the wearer within.

Some zentais wear their suits in superhero fashion, and do good deeds in public, while others wear the suits for sexual kicks. They are often mocked in Japanese pop culture. One academic cited in the article believes that the wearers use the suits to hide their appearance in order to force others to deal with their "true" underlying identity.

I'm not going to pull the knee-jerk Western "bwahaha, Japanese culture is so weird" thing here. Rather, I'm interested to know if the Japanese fad directly influenced the low-budget Canadian PSA. After all, these memes shoot around the world in moments, and we're all soaking in a sort of cultural stone soup that attracts all kinds of random ingredients.