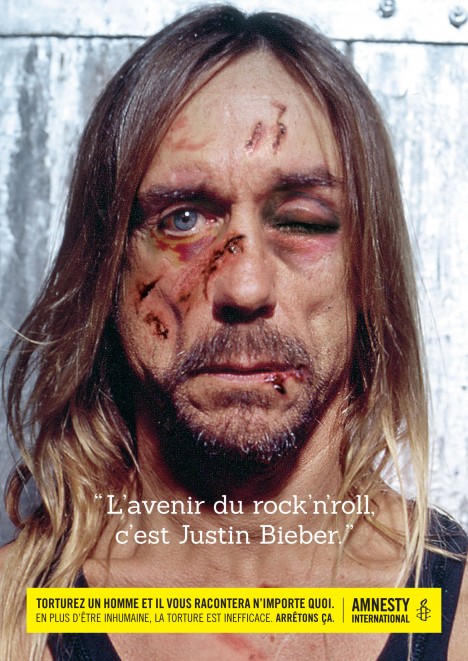 It happens all the time. And the creatives may have meant well. But just because you have a clever idea for a celebrity endorsement, and access to Photoshop, doesn't mean you can use their images without permission! No matter what the cause.

Last week, I wrote about this campaign on Osocio. With the tagline, "Torture a man and he'll say anything," witth Iggy Pop confessing, “Justin Bieber is the future of Rock and Roll,” The Dalai Lama declaring that “A man who doesn’t own a Rolex by age 50 has wasted his life” and Karl Lagerfeld stating “A Hawaiian shirt and flip-flops are the height of elegance.”

Clever, yes. But suspicious. While Iggy happily shills for PETA, The Dalai Lama seemed like a stretch. Conclusion: "What I’d really like to know is if the celebrities had any say in the use of their images."

Well, guess what? Pitchfork reports that Iggy and His Holiness, at least, had no say in the use of their images.


To generate awareness about our campaign against torture, Amnesty International Belgium French speaking section used an image of Iggy Pop without his authorization.
Even though we acted in good faith, we would like to apologise to Iggy Pop for having done so.

The overall goal of this campaign is to try to influence people’s ideas on the use of torture. According to surveys, a shocking number of people believe that “torture may sometimes be useful” ; more than 36% of people even think that torture is justified in some cases. This is unacceptable, and we illustrate this reality with the message that a man who is tortured will say anything in order to escape this awfulness, using provocative images and statements to attract public attention. We would therefore also like to make it clear that the statement attributed to Iggy Pop that he believes Justin Bieber is the future of rock and roll does not represent Iggy Pop’s personal opinion but was part of the creative process for this campaign and was intended to be ironic.

For the launch of our latest campaign against torture, the image of His Holiness the Dalai Lama was used by our section (Belgium french speaking) and was widely shared on the internet. Although the Dalai Lama was not the target of the campaign, we understand that this image has caused particular concern in some quarters. We have therefore chosen to remove this picture from our digital material in order not to cause any further upset and ensure people’s attention remains focused on the real aim of this campaign : to stop torture.

We apologise for any upset caused by this image.


Using celebrities without permission is common practice worldwide, especially in countries that don't have strong legal ties with the celebrities' countries of residence. But to hijack an image — one that, for better or worse, is the celebrity's brand — for an organization of such high prominence, for an important cause, and in an EU country, is idiocy.

Don't worry, Amnesty. I blame your agency. Who was that, anyway?