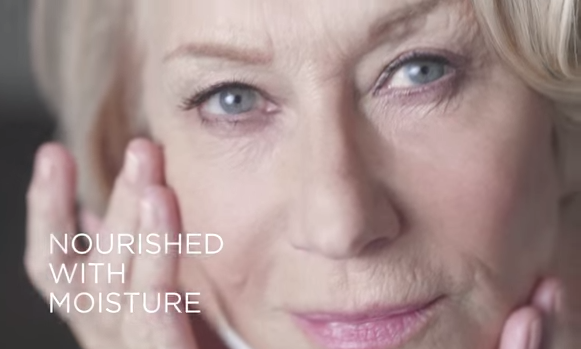 Dame Helen is an interesting choice, as she's almost 70 years old, and has remained a sex symbol since the days when she was doing bold scenes in movies like Caligula (1979) and The Cook, the Thief, His Wife & Her Lover (1989). She has an Academy Award for Best Actress under her belt, as well as four BAFTAs, three Golden Globes, four Emmy Awards, and two Cannes Film Festival Best Actress Awards. And she continues to steam up the media.

I love some of the copy in this ad: "help me look like me" is a great self-affirmation, and "grow another year bolder" is nice. But the best message is "The perfect age... is now!"

There's a lot to like about the ad, despite the fact that is for an anti-wrinkle product with the latest fad ingredient. After all, Dame Helen's hard-earned wrinkles are clearly on display, in close up.

My main criticism is the ending. Not because of the age difference, but because it's creatively lazy. I was so excited seeing Dame Helen be herself throughout the ad that I found the fiction of the older woman "preying" on much younger men to be a cliché that is beneath her. (In reality, she's married to a man her age.)

Dame Helen doesn't need to prove that she's sexy to all ages. She just is. And the ad would have been so much better if they had not felt the need to end it with a message that she needs it to be validated by a young man.
Posted by Tom Megginson at Thursday, February 12, 2015