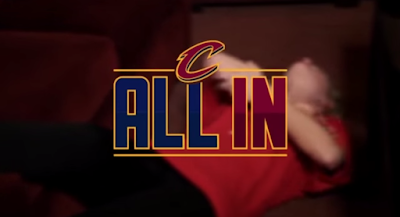 (The "Trigger Warning" in the headline was a spoiler, but I really don't want to re-victimize anyone who has been brutalized by a partner.)

Salon reports that the Cleveland Cavaliers, a National Basketball Association team, decided to run a parody ad on their in-game digital scoreboard that made fun of rival Chicago Bulls.

First, here's the United Healthcare ad they were parodying:

Salon's Joanna Rothkopf writes, "the spot, coupled with the recent hire of sexual harasser Isiah Thomas to run the W.N.B.A.’s Liberty franchise as president, indicates that the NBA is completely unaware and unable to address the epidemic of violence towards women plaguing professional sports."

I have to admit, when I first watched the video, for a second I thought the criticism was misplaced because it could have been intended to show that he simply (but cruelly) failed to catch her. But then, when the camera lingered on the wounded woman on the floor, there was no doubt in my mind that it was intended to show him hurting her. For laughs. Because... "go, team, go"?

The video was deleted from Vimeo, where it purportedly once had an official online home, but was captured and reposted on YouTube by basketball writer Steve McPherson, with the comment "Domestic violence is super hilarious. Right, guys? Right? Hello?"

I have no doubt that the makers of the video didn't think they were doing anything wrong. But this kind of cluelessness is inexcusable, and not just because of the many pro athletes who have been charged with partner abuse. The fans can be a problem as well.

A few years ago, The Globe and Mail's Marina Adshade wrote about research into how watching football is a trigger for domestic violence in some men:


Using twelve years of U.S. data from police reports of violent domestic incidents on Sundays during the professional football season and point spreads made by Las Vegas bookmakers for football games (as a way of measuring if fans expected the game to be a victory or loss), the authors of this paper found that when a home team was predicted to win by four or more points and instead lost the game the level of violence perpetuated by men against their wives and girlfriends increases by a remarkable 10 per cent. This violence was isolated in a narrow window immediately following the end of the game and the number of acts of family violence increases as games became more important.

So, to even lightheartedly correlate super-fandom with domestic violence (and, in the end, control) is simply appalling. And stupid for the brand.
Posted by Tom Megginson at Thursday, May 07, 2015