Ads about periods too much for MTA 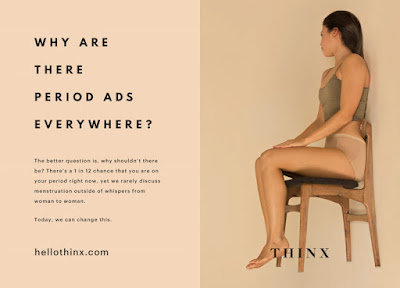 I don't really like these ads much, but I don't see anything offensive about them. The media agency for Metropolitan Transportation Authority (NYC) however, has issues with the imagery, and even the word "period." (MTA itself was not involved in the decision.)

"I stated [to an Outfront rep] that it was extremely disheartening that [certain other ads] could fly, but something for women that speaks directly to women isn't OK by them," del Rosario told Mic. "He replied, 'This is not a women's issue. Don't try to make it a women's rights thing.'"

Apparently, they were also concerned with the amount of skin showing in the Thinx ads, as well as the  cheeky use of a grapefruit and the contents of an egg.

MTA has run some rather obnoxious breast augmentation ads before, but apparently children are going to be more traumatized by being reminded of the very organs that made them.