Bank of Montreal #RemembranceDay campaign does an about-face

A couple of days ago, I spotted this ad on Facebook: 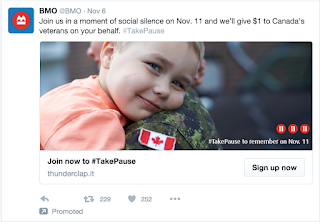 Nice, eh? Except not really. It's a big bank, and they made a $1.2-billion profit in the third quarter of 2015. And they're buying social media engagement for $1 a pop?

I complained on Twitter, as did many other Canadians, but someone much more famous than most of us really got their attention:


It should be noted that this Sarah Silverman is a parody account. But it — and presumably the complaints of many other Canadians — seems to have convinced BMO to revise their message earlier today: 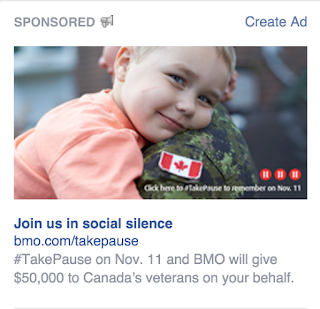 Can you spot the difference? The full donation amount is mentioned, and it is not contingent on the number of engagements or shares. The link still goes to their Thunderclap site. Here's how the promotion is worded now:

Remembrance Day is about taking pause to remember those selfless men and women who’ve put their lives on the line for our freedom.

On November 11 at 11am, join us in a moment of social silence to honour these brave men and women. That means no status updates. No re-tweeting. No nothing.

On behalf of all those who participate, BMO will be giving $50,000 to The Royal Canadian Legion Dominion Command Poppy Trust Fund.

Their hearts may seem to be in the right place, but keep in mind that this is branded engagement piggybacking on a solemn national day of remembrance for Canada's war dead. No longer holding people's emotions for a $1-per-engagement ransom is a start, but don't fool yourselves: this is private sector marketing trying to earn social media reach on the cheap. Its shareholders wouldn't have it any other way, no matter how they — or the employees of the bank – feel about our soldiers and veterans. (I'm sure they are as good-hearted as the rest of us; but like any corporation the bank's job is to increase share value at all costs.)

Regardless, their YouTube video for the campaign is excellent:

Take a quiet minute tomorrow to remember. Not because it makes you look good on Facebook or Twitter. Not because a brand told you to. And not even to get them to make a token donation to a good cause.

Do it because it's right.

This is the ad that's appearing now: 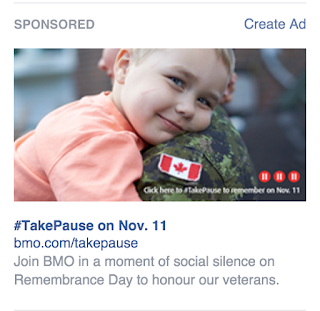