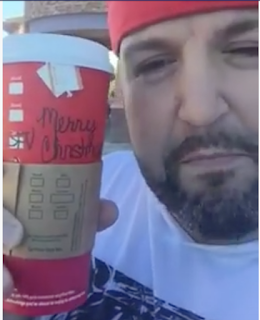 A former Arizona pastor named Joshua Feuerstein was angry that Starbucks' Christmas cups this year have no recognizable holiday motif with the exception of the colour red. He is also angry that (according to him) Starbucks employees are forbidden to use the phrase "Merry Christmas."

So he took to Facebook with this rant and a video (which you can watch here):

Starbucks REMOVED CHRISTMAS from their cups because they hate Jesus ... SO I PRANKED THEM ... and they HATE IT!!!!  #share
Use #MERRYCHRISTMASSTARBUCKS
Follow --> Joshua Feuerstein
Posted by Joshua Feuerstein on Thursday, November 5, 2015

Not too bright, this fellow. But his post has been viewed more than 10 million times, and shared almost 400,000 times.

Which is really good for Starbucks.

After all, people will have to buy a Starbucks coffee to be able to pull off this "prank." Depending on the demographics of Mr. Feuerstein's followers, some might even be new customers. It's the exact opposite of a boycott, and the baristas will probably be mildly amused.

That is, as long as people don't bring their guns. That's just asinine.