Imagine you never saw this ad

I have a confession to make: I never really got over John Lennon's murder.

Some kids have sports heroes. At 10 years old, mine was a Beatle. A damaged, but brilliant musician who had just recently come out of retirement to transform himself from one long anger management case study to a domesticated urban dad.

Even at my tender age, I was put off by how many people cashed in on his death. But as I grew up and fell in love myself, I became an apologist for the one person most vilified in the examination of his life: Yoko Ono.

John loved Yoko. Understanding what that means, now, brings tears to my eyes when I hear the songs he wrote about her. And while she is often (erroneously) blamed for breaking up the Beatles, John always insisted that she "saved" him. And modern accounts of his life seem to indicate that he did need saving — from profound depression and abandonment issues.

John's music has appeared in commercials since his death. "Revolution" for Nike. "Merry Xmas (War is Over)" on a children's charity appeal. But no posthumous endorsement has been as cynical as this:

What's even worse is that it is not a misappropriation, but authorized by John's heirs, Yoko and "Beautiful Boy" Sean.

"She [Yoko] did not do it for money. Has to do w hoping to keep dad in public consciousness. No new LPs, so TV ad is exposure to young," Ono Lennon said, adding: "Look, TV ad was not for money. It's just hard to find new ways to keep dad in the new world. Not many things as effective as TV."

Who knows what John Lennon would be like, had he outlived George. Maybe the '80s would have seen him mellow out to the point of total commercialism. But when someone dies relatively young, they get the benefit of having their principles trapped in the amber of the day.

I can't see the John Lennon of my childhood hawking cars with his revolutionary words. To my mind, the best way to keep John relevant is not to twist what he said but to just let young people hear the actual words.

So kids, for your benefit, here's some social marketing that matters from the man I remember:

And the controversial one:

I wonder why, if she wanted to make John's message relevant to today, Yoko didn't just buy her own ad space somewhere, as she and John did for their NYC "War is Over" billboard back in the day: 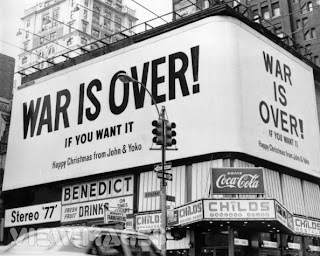 We miss you, John. But you probably would've forgiven Yoko anyway.