Will Intel's signature sound get a hip hop remix?

High technology and the arts share a burning passion for creativity. So should it come as any surprise that a tech company would want to tap into popular music for inspiration?

That's exactly what Intel has done. According to The Drum, the processor giant has appointed Black-eyed Peas frontman (and hip hop solo artist) Will.i.am as its new director of creative innovation.

The article says that will.i.am "will collaborate with Intel on many creative and technology endeavors across the 'compute continuum' that may include such devices as laptops, smart phones and tablets."

“Nearly everything I do involves processors and computers, and when I see an Intel chip I think of all the creative minds involved that help to amplify my own creativity,” said the artist, real name William Adams.

“Teaming up with the scientists, researchers and computer programmers at Intel to collaborate and co-develop new ways to communicate, create, inform and entertain is going to be amazing," he added.

This isn't the first time someone has made the crossover from music to high tech. One of the most interesting examples was when former Iggy and the Stooges Guitarist James Williamson quit the music business in the late '70s, went back to school, and quietly rose up the ranks to become Vice President of Technology Standards for Sony.

The funny thing in James' case was that nobody at Sony knew that he was a legendary proto-punk rocker. Until his recent retirement and reunion with Iggy and the surviving Stooges, and subsequent tours playing their old songs — which now have a huge cult following. 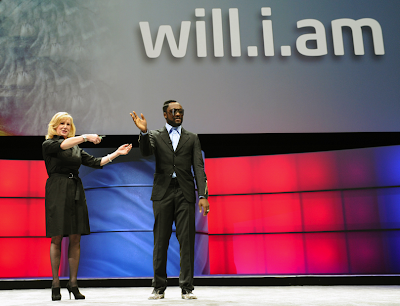