Shitstorm in a KIA Coupe

The controversy around the "pedo" KIA ad that won a Silver at Cannes just won't go away.

I just read a post at Care2.com, which asked "Do Pedophile Fantasies Belong in Award-Winning Ads?"

They don't belong in any ads, IMHO, but I'm not sure pedo promotion was the intent.

First of all, the ad was a series of two, both of which cut a story into two parallel streams, a childish one and a pornographic one: 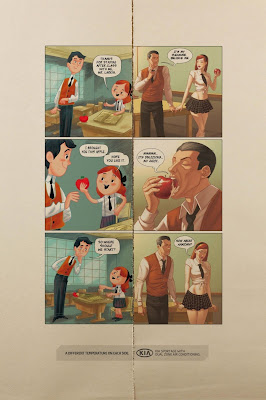 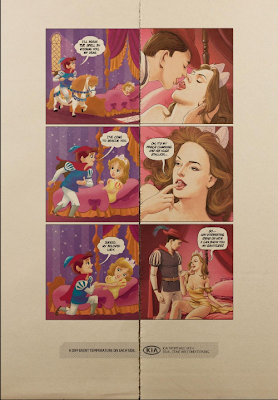 The headline, "a different temperature on each side", was presumably written in Portuguese for this Brazilian ad. "Temperature", can I assume, refers to the contrasting tones of the comic?

"Given the global crisis in child prostitution and trafficking, it’s actually more offensive that KIA believes that selling cars via child pornography is no problem as long as they don’t do it in the U.S. What’s more, Moma is located in Sao Paulo, Brazil, a country that is said to have the worst child trafficking record in the world after Thailand. No wonder the agency thought the ad was 'clever.'"

I'm not going to defend this ad on the basis of creativity (because it's creepy) or strategy (because I can't see it fulfilling any business objectives.) But I will hazard a guess that the mostly-male creative team is not made up of pedophiles. Perverts, perhaps, who created a campaign that creeps people out and furthers harmful stereotypes of "sexy" student-teacher fantasies, sure. But I think they really intended to create a thought-provoking sense of contrast.

But it won't matter now. The agency, MoMa, appears to do business with KIA Brazil. They can kiss that goodbye.

According to PR from KIA Motors America:

IRVINE, Calif., June 24, 2011 - Kia Motors America (KMA) has become aware of an offensive piece of advertising material that was created by an ad agency in Brazil that KMA has no business relationship with and has never worked with. This ad was not created in the U.S. by Kia Motors America or any of its marketing partners and does not reflect the opinions or values of KMA or Kia Motors Corporation. The ad is undoubtedly inappropriate, and on behalf of Kia Motors we apologize to those who have been offended by it. We can guarantee this advertisement has never and will never be used in any form in the United States, and our global headquarters in Seoul, South Korea is addressing the issue with the independent Brazilian distributor.

The other weird thing about this is that I cannot find the ad anywhere on MoMa's site, can't find one in Portuguese anywhere. Kia Motors Corp. spokesman Michael Choo is quoted as saying "We have received confirmation that these ads were never published nor were there any plans to run a campaign based on these creatives in Brazil or anywhere else for that matter. We can ensure that these ads have not been run in public other than being submitted for the Cannes Lions competition and that they will not appear in any public forum in the future."

Is it possible the Cannes judges were tricked by a fake ad? And if so, what will happen to MoMa?

I guess this will be one story to watch.

AN UPDATE ALREADY: Adland noticed that the CD on the KIA ads, Rodolfo Sampaio, was also in the credits of DDB Brasil's awful (and fake) WWF/911 ad.
Posted by Tom Megginson at Wednesday, June 29, 2011