Last month, Cannes awarded a campaign that likened men to war heroes for putting up with their partners' periods.

Now the California Milk Processor Board (of "Got Milk?"fame) are getting in on the sexist action: 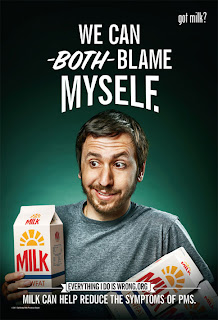 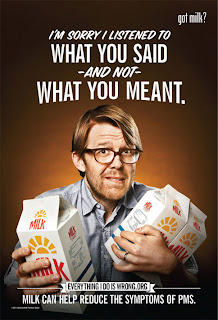 And this isn't just a couple of ads; it's a huge campaign that includes a branded microsite that very quickly beats the joke to death. 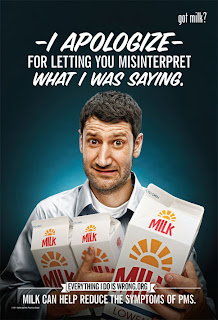 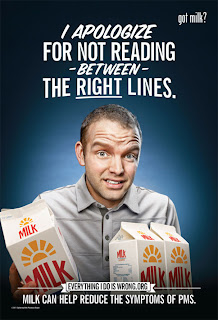 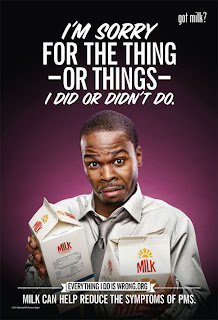 The campaign has been roundly panned on social media, and Ms. Magazine has even started a petition to get it pulled.

From the Ms. blog:

Jeff Goodby, of Goodby, Silverstein & Partners, the creative agency behind the campaign, is sitting in that sweet spot where he gets to capitalize on anti-feminist humor about women being too sensitive and/or irrationally angry, and then write off any criticism as women being too sensitive and/or irrationally angry. Despite Goodby’s insistence that women with a sense of humor (i.e. not fuddy-duddy old feminists) will find this hilarious, such stereotypes are in fact anti-women. They’re the same stereotypes cited by those trying to keep women out of good jobs, and those who say we shouldn’t have a woman president because she’d start a war just because it was her time of the month. Additionally, jokes about women’s irrational anger or emotional instability reinforce the idea that men shouldn’t have to work hard in a relationship, a marriage, or at anything, really, because if a woman gets upset it’s because of her hormones and not for any rational, legitimate reason.

I also wonder what another women's advocacy group, La Leche League, will have to say to the California Milk Processor Board — their partner in an ongoing "Got Breastmilk?" promotion.

Tip via AdFreak
Posted by Tom Megginson at Friday, July 15, 2011