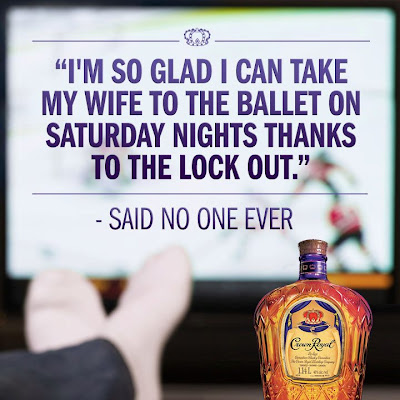 ...too late. It already happened.

This one is from Crown Royal's Facebook feed. It camed with the caption, "Anyone else cry into their glass of Crown when they heard lock out news? This pretty much sums up how we feel."

Although if you blinked, you would have missed it. It was almost immediately taken down from the public feed. It lives on, however, in their photo albums.

Why is it a problem? This is Canada. Hockey counts many, many women among its fans here. And they're just as hardcore as the men.

In fact, when the CBC launched a "woman-friendly" sports streaming site called "While the Men Watch, " and angry fan noted, in an editorial in Maclean's magazine:


Jaclyn Garfinkle, a 23-year-old sports fanatic and an associate producer at TSN’s Off the Record, thinks While the Men Watch is grossly “miscalculated” in its assumption that women don’t know about sports. “I think it’s somewhat ridiculous,” she says. “I think females in Canada are really underestimated in terms of how much they watch hockey.”

Women play hockey here, too. And they're good at it.

The whisky brand may be trying to appeal to a male audience, but it's too bad they have to do it with such outdated ideas about men and women. Appealing to some guys' anti-arts sentiments at the cost of angering female sports fans just doesn't seem worth it.