The above billboard, paid for by an anonymous "private family foundation" was placed in poor and predominantly Black or Hispanic neighbourhoods in Cleveland, Cincinnati and Milwaukee.

The Plain Dealer reports that The Lawyers' Committee For Civil Rights contacted Clear Channel (the media company in Cleveland) about the ads, explaining that the signs the signs, "stigmatize the African-American community by implying that voter fraud is a more significant problem in African American neighborhoods than elsewhere," and the billboards "attach an implicit threat of criminal prosecution to the civic act of voting."

As of October 15, Clear Channel — owned in part by Mitt Romney’s former firm Bain Capital — was refusing to remove the billboards, blaming a rogue salesperson for allowing anonymity to be stipulated in a contract. Jim Cullinan, vice president of marketing and communications for Clear Channel Outdoor, told the Washington Post, " once we put them up and signed a contract, we had to live with the anonymity."

According to an update from Media Post, the Clear Channel people have changed their minds about that, agreeing to remove the ads because the billboards actually do violate their policy of "not accepting anonymous political ads" — contract or not. Some sources state that the anonymous advertisers were given the choice to identify themselves publicly or have their campaign removed. Showing the typical lack of personal responsibility typical of trolls everywhere, they chose anonymity.

Clear Channel wasn't exactly showing an amazing change of heart. They didn't have much of a choice. In Cleveland, City Councilwoman Phyllis Cleveland and State Sen. Nina Turner held a rally in front of one billboard installation on October 11 to demand the removal of the ads. There were also petitions at sumofus.org, change.org and signon.org, and the effort was coordinated by online civil rights organization colorofchange.org.

People's World reports that billboards in Cincinnati, managed by local media company Norton Outdoor, are still up. (Norton's mission statement claims, "We are equally committed to being a good corporate citizen in every community in which we do business")

Clear Channel, in a gesture intended to calm the PR crisis, has donated 10 billboards around the Cleveland area for this message: 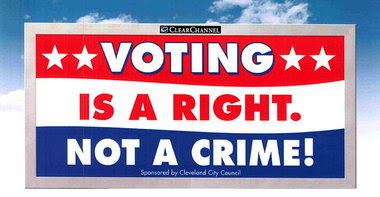