For Facebook users, social ads are just the slightly annoying cost of using the free social network. For advertisers, they are a cheap and highly targeted way to reach potential customers.

But as with all web advertising, Facebook ads for big brands occasionally show up in context with questionable or objectionable content.

Here are some examples, from wallblog.co.uk (click to enlarge): 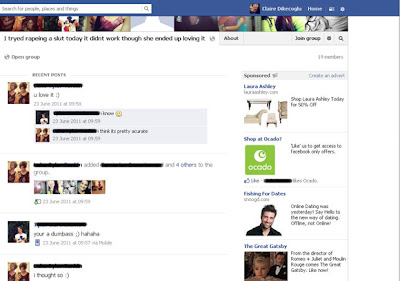 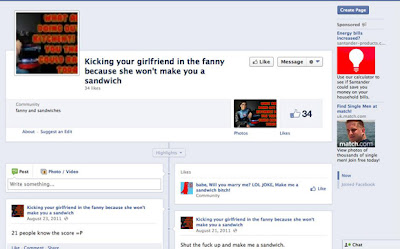 Facebook's problem with pages that promote rape culture is well known. The social network that has the sensibilities of a stereotyped grannie when it comes to showing certain kinds of nudity in even the most innocent context can't seem to stop pages that encourage criminal assault and rape.

The issue of brand ads showing up on awful Facebook pages made mainstream news yesterday when it was revealed that Dove — that paragon of pro-women marketing — had one of its ads show up on a page called "Drop kicking sluts in the teeth".

From the Daily Mail:

Dove Cosmetics, the RSPB [Royal Society for the Protection of Birds] and audiobook site Audible are among those who have complained to the social networking giant that group pages with titles such as 'Raping!', 'Drop kicking sluts in the teeth' and 'This is why Indian girls are raped' have all featured their adverts.

Today the site was facing a major PR crisis amid claims it was slow to respond to the complaints.

Dove said it was 'shocked to see our advert' on 'Drop kicking sluts in the teeth'.

However, the ‘closed group’ page is still active, listed with a 'controversial humor' warning.

Vodafone also confirmed that it had contacted Facebook after one if its adverts appeared on a page called 'This is why Indian girls are raped', which contained pictures of scantily clad Indian women.

The page was seen as particularly offensive given recent widespread reports of rape in India.

The RSPB also confirmed that it had contacted Facebook about an advert that appeared on the same page.

'Unless they can assure us that they are working out a way to guarantee this kind of thing doesn’t continue, we will be forced to consider our advertising options,' a spokesman said.

Ouch. I'm wondering what Facebook can actually do about this. Two years ago, they pulled a few controversial rape joke pages after public outcry. But the network is still home to the same kind of blatant racism and sexism that infests the internet at large.

There is, of course, a question of freedom of speech. But truth be told, Facebook is free to censor what it wants.


You will not post content that: is hate speech, threatening, or pornographic; incites violence; or contains nudity or graphic or gratuitous violence.

It also gives itself an out for what it doesn't censor:

Free speech is one thing; advertiser pressure is another. Just as Google Adsense tends to shut down its relationship with any site it sees violating its strict content rules, Facebook may decide that its brand advertiser money is more important than hosting the sexist rants of frustrated teenage boys.