This could be the worst Facebook ad of all time

DIY Facebook ads have long been problematic. Cheap to buy (you only pay for the clicks) and easy to create, they lend themselves to the worst sorts of hucksters.

But even worse is the practice of stealing photos for Facebook ads. It not only hurts the credibility and privacy of people who find themselves appearing to endorse random and often inappropriate things. In some cases it can be downright cruel: 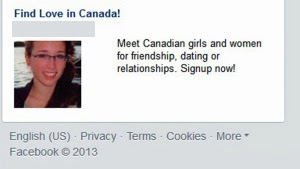 According to the CBC, this Facebook ad is for a German internet dating site. (I blocked out the URL. Please don't give them traffic or PR!)

If you don't recognize the face in the ad, that's Rehtaeh Parsons, a Canadian teen who committed suicide last April after being raped at a party while too intoxicated to consent, and experiencing extreme online sexual harassment and abuse when photos of the crime were circulated among her peers.

Whether the company used the photo accidentally or on purpose is unknown. The web site the ad directs to is no longer online.

After outrage over the ad, first spotted by a Facebook user in Toronto, caused outrage, Facebook pulled the ad:


"This is an extremely unfortunate example of an advertiser scraping an image and using it in their ad campaign," a spokesperson from Facebook wrote in a statement, calling this a gross violation of their advertising policies. "We apologize for any harm this has caused."

For once, an organization famous for being so afraid of women's bodies that it even censors the word "breast" in an a non-sexual context is doing the right kind of censorship.
Posted by Tom Megginson at Wednesday, September 18, 2013