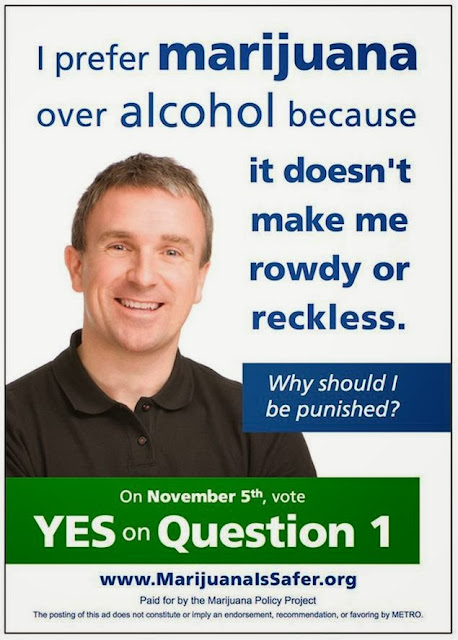 Don't get me wrong — I like the drink. But since I was old enough to understand such things, in the '80s, I have railed against a legal system in which alcohol and tobacco are perfectly legal drugs for adults and something as soft as marijuana is not.

As a matter of fact, my very first paid writing job was a full-page 1990 op ed in the Kingston Whig-Standard in which I looked at the history of drug legislation as one of socially accepted versus not-accepted drugs. It's a history that often had to do more with racism and industry than with medicine or other sciences.

So I have to admit that I like this bold campaign by The Marijuana Policy Project in Portland, Maine. According to NY Daily News, the organization spent $2,500 on a transit campaign that support's the city's ballot measure to legalize recreational adult cannabis use.

Despite complaints from people who claim the ads will encourage pot smoking by youth, the transit system says they have no choice but to leave them up, because they are genuinely political. “If we’re going to allow one type of political advertising, we have to allow it all,” a spokesperson told the Portland Press Herald. It is also notable that Greater Portland District Transit allows alcohol ads on their buses (but not tobacco), rendering the "won'tsomeonepleasethinkaboutthechildren" argument another double-standard. Medical marijuana use is already legal and regulated in Maine.

But is pot safer than booze? The death toll of alcohol through overdose, liver damage, drunk driving and alcohol-fuelled violence is well documented. Pot's potential harms, besides  are barely understood.

According to the US National Institutes of Health, the problems with alcohol are simple (if sometimes devastating) but well-understood:

Alcohol affects every organ in the drinker's body and can damage a developing fetus. Intoxication can impair brain function and motor skills; heavy use can increase risk of certain cancers, stroke, and liver disease. Alcoholism or alcohol dependence is a diagnosable disease characterized by a strong craving for alcohol, and/or continued use despite harm or personal injury. Alcohol abuse, which can lead to alcoholism, is a pattern of drinking that results in harm to one's health, interpersonal relationships, or ability to work.

The same organization takes a lot longer to explain the harmful effects of marijuana, partly because the research is sparser and less conclusive:


Marijuana use can have a variety of adverse, short- and long-term effects, especially on cardiopulmonary and mental health.

Marijuana raises heart rate by 20-100 percent shortly after smoking; this effect can last up to 3 hours. In one study, it was estimated that marijuana users have a 4.8-fold increase in the risk of heart attack in the first hour after smoking the drug. This may be due to increased heart rate as well as the effects of marijuana on heart rhythms, causing palpitations and arrhythmias. This risk may be greater in older individuals or in those with cardiac vulnerabilities.

Because it seriously impairs judgment and motor coordination, marijuana also contributes to accidents while driving. A recent analysis of data from several studies found that marijuana use more than doubles a driver’s risk of being in an accident. Further, the combination of marijuana and alcohol is worse than either substance alone with respect to driving impairment.

Marijuana smoke is an irritant to the lungs, and frequent marijuana smokers can have many of the same respiratory problems experienced by tobacco smokers, such as daily cough and phlegm production, more frequent acute chest illness, and a heightened risk of lung infections. One study found that people who smoke marijuana frequently but do not smoke tobacco have more health problems and miss more days of work than nonsmokers, mainly because of respiratory illnesses.

A number of studies have shown an association between chronic marijuana use and mental illness. High doses of marijuana can produce a temporary psychotic reaction (involving hallucinations and paranoia) in some users, and using marijuana can worsen the course of illness in patients with schizophrenia. A series of large prospective studies also showed a link between marijuana use and later development of psychosis. This relationship was influenced by genetic variables as well as the amount of drug used and the age at which it was first taken—those who start young are at  increased risk for later problems.

Associations have also been found between marijuana use and other mental health problems, such as depression, anxiety, suicidal thoughts among adolescents, and personality disturbances, including a lack of motivation to engage in typically rewarding activities. More research is still needed to confirm and better understand these linkages.

Marijuana use during pregnancy is associated with increased risk of neurobehavioral problems in babies. Because THC and other compounds in marijuana mimic the body’s own cannabinoid-like chemicals, marijuana use by pregnant mothers may alter the developing endocannabinoid system in the brain of the fetus. Consequences for the child may include problems with attention, memory, and problem solving.

Finally, marijuana use has been linked in a few recent studies to an increased risk of an aggressive type of testicular cancer in young men, although further research is needed to establish whether there is a direct causal connection.

In my opinion, every drug — whether recreational or medicinal — has the potential to be good, bad or ugly. It's all a matter of how it is used.

You can read the campaign's own comparative argument for legalization at marijuanaissafer.org.