The most naked ad I've ever seen is refreshingly unperverted 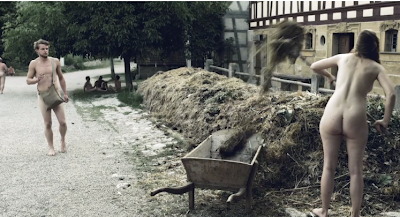 According to the evolution of public lice, humans and our ancestors have been wearing some sort of clothing for up to 3.3 million years. But this mythological reimagining of the dawn of pants is a little less icky.

I didn't count them, but prepare yourself for a multitude of swinging penises. And twice as many bared breasts. (Although I suspect some of the women in the ad concealed their nether parts behind merkins.)

It was shot at two open-air museums, which presented some logistical problems, according to this interview:


Since we were shooting with a naked cast, the managers of the museum didn’t want us to interfere with the school classes visiting on a daily basis. Hence, we could only shoot outside in the early morning and in the late afternoon when the museum was closed. However, due to a timing mistake, we were still shooting when the first grade school class passed by our set. I think they weren’t shocked too much, but the teachers wanted to call the cops… Fortunately they didn’t see us shooting the scene in the church.


The actors, apparently, are mostly real-life nudists who were recruited from online naturist communities. And I think that's why this thing ends up being entirely OK in my book. The nudity is equal, it's natural, and it's funny.