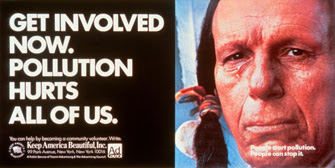 Most of them, by now, also know that Iron Eyes Cody was no Native American. Born to Sicilian Immigrants in southwestern Louisiana in 1904, Espera Oscar de Corti became an actor in his youth, and found that he could "pass" as a Native American in Hollywood.

de Corti, changing his name to "Cody," claimed to have Cherokee-Cree heritage. He played native roles in dozens of westerns, with John Wayne and other stars of the mid-20th century. His chanting was featured in the Joni Michtell song "Lakota." And, of course, he was the Noble Savage face of Keep America Beautiful. All while sharing more heritage with Christopher Columbus than with the people who got the shit end of the Columbian Exchange.

By all accounts Iron Eyes Cody tried to honour his assumed ancestry. He became an activist for Native American causes, and did lecture tours preaching against the harm of alcohol. He married a Seneca archaeologist, Bertha Parker, and they adopted two adopted two Dakota and/or Maricopa children. He even wrote a book about native sign language.

He also invented a backstory, quoted by Glendale News Press from  a 1951 local newspaper article:


“Iron Eyes learned much of his Indian lore in the days when, as a youth, he toured the country with his father, Thomas Long Plume, in a wild west show. During his travels, he taught himself the sign language of other tribes of Indians”

The article said that the television star and his wife would appear at a Glendale Historical Society event to tell the story of the “Indian Sign Language in Pictures'' and would demonstrate Indian arts and customs. Plus, the couple would bring along their 3-month-old “papoose” Robin (Robert Timothy). All were to be attired in Indian regalia.

In 1996, three years before his death, Iron Eyes Cody was outed as European by his half-sister, May Abshire, who offered proof of the actor's Sicilian parentage to the Times-Picayune. Cody denied the allegations.

Today, such a shocking exposé, proving that an upstanding member of an ethnic community was really an outsider, would be all over social media. Just like Rachel Dolezal.

I'm having a hard time digging up any initial reactions to Iron Eyes Cody's outing from indigenous people in the United States or Canada. How is he remembered? Did he help make native issues more visible, or did he obnoxiously appropriate an oppressed culture that didn't belong to him?

Please comment below. It's moderated, but I'll approve it ASAP.
Posted by Tom Megginson at Tuesday, June 16, 2015