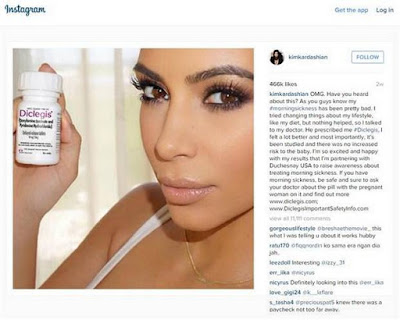 
OMG. Have you heard about this? As you guys know my #morningsickness hasbeen pretty bad. I tried changing things about my lifestyle, like my diet, butnothing helped, so I talked to my doctor. He prescribed me #Diclegis, and I felt alot better and most importantly, it’s been studied and there was no increased riskto the baby. I’m so excited and happy with my results that I’m partnering withDuchesnay USA to raise awareness about treating morning sickness. If you havemorning sickness, be safe and sure to ask your doctor about the pill with thepregnant woman on it and find out more www.diclegis.com;www.DiclegisImportantSafetyInfo.com.


It's been no secret that many celebrities' social media endorsements are for sale. Five years ago, I blogged about the brazenness with which their followings are bought and sold as commercial media.

Product placements are rampant on narcissistic selfie feeds with millions of dedicated followers, but somehow the United States government decided that this selfie crossed the line into pharmaceutical advertising.

After Ms. Kardashian posted this blatant endorsement to her 42.6 million followers in July, the US Food and Drug Administration sent a letter to the manufacturer of the anti-morning-sickness medication, demanding immediate elimination of the post:


The Office of Prescription Drug Promotion (OPDP) of the U.S. Food and Drug Administration (FDA) has reviewed the Kim Kardashian Social Media Post (social media post) (2015-0069-01) 1 for DICLEGIS (doxylamine succinate and pyridoxine hydrochloride) delayed-release tablets, for oral use (DICLEGIS) submitted by Duchesnay, Inc. (Duchesnay) under cover of Form FDA 2253. The social media post was also submitted as a complaint to the OPDP Bad Ad Program. The social media post is false or misleading in that it presents efficacy claims for DICLEGIS, but fails to communicate any risk information associated with its use and it omits material facts. Thus, the social media post misbrands DICLEGIS within the meaning of the Federal Food, Drug, and Cosmetic Act (FD&C Act) and makes its distribution violative. 21 U.S.C. 352(a), (n); 321(n); 331(a). See 21 CFR 202.1(e)(5). These violations areconcerning from a public health perspective because they suggest that DICLEGIS is safer than has been demonstrated.

This is serious stuff. By treating the Instagram post as a paid ad, the FDA is bringing the full weight of its authority not on citizen Kim Kardashian, but on the company that they assume paid her to shill for them. As I'm sure you know, pharmaceutical advertising is heavily regulated. One of the most onerous parts of that regulation, for advertisers, is the endless list of risks, contraindications, and possible side effects. The FDA points out specifically that the drug has not been studied in women with hyperemesis gravidarum. Omissions like this can can prove tragic.

Since this time, the Instagram post has been removed. Furthermore, the manufacturer admitted to media that it was a paid endorsement (duh!) but that Ms. Kardashian really does take the drug and it was prescribed by her doctor. The Independent quotes Thomas Abrams, the director of the Office of Prescription Drug Promotion at the FDA, saying that the manufacturer is complying with the warning.

An FDA Q&A page states that the emergence of social media has "complicated the job" of promotional regulation, stating "we generally do not have authority over statements made by independent organizations or persons—what we call third parties—unless they are acting on behalf of a company." They also mention that this isn't the first time they have intervened.

This should be an important wake-up call for certain advertisers using celebrities as "native advertising" channels. As the line between advertising and earned media blurs, the regulators have learned to simply follow the money.