Can man live on bacon alone? Oscar Mayer is giving it a shot 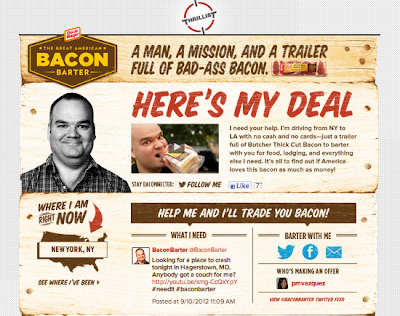 Have bacon, will travel.

That's the idea behind Oscar Mayer's clever new online campaign. They're sending a man across the United States with no money. All he has is a van full of Oscar Mayer bacon to barter for non-bacon food, lodging, and other expenses.

The campaign offers people along the route to make barter offers with "Josh Sankey" via e-mail, Twitter or Facebook.

I'm not a big fan of factory farmed and mass-processed bacon. But as far as marketing is concerned, this is pretty damn tasty.